Thanks to Cuba Holidays I was fortunate enough to enjoy 7 nights in Cuba split between Havana and Varadero.

I flew from London Gatwick to Havana with Virgin Atlantic and experienced premium economy on the outbound and economy on the return. Premium and economy both had ample leg room, the food was of a good standard, however it was the little touches that made premium that extra bit special.

We were shown around several hotels in Havana as well as some on the outskirts. Hotel Telegrafo,  is a 4* hotel in a very good central location, opposite ‘Parque Central’ otherwise known as Central Park.  The hotel has very traditional décor, we looked around a Standard Room and a Junior Suite both on the first floor. The rooms had beautiful high ceilings with some rooms having a balcony looking out onto the park.

After viewing the hotel we enjoyed a walking tour of Havana. We walked along the Calle Obispo. Rich in history, architecture, and entertainment. Along this stretch are the Hotel Ambos Mundos, home to Ernest Hemingway for seven years, and Taquechel Pharmacy Museum, which has been dispensing herbal remedies for more than a century.

We stopped at three boutique hotels while en-route. The Florida Hotel, Hotel Ambos Mundos and The Santa Isabel. We were able to look around the Florida hotel, located right in the centre of Old Havana and only has 24 rooms, four of which were Junior Suites. The rooms are very traditional with an on-site restaurant and bar. Perfect if you want tradition in the heart of Havana.

We ate lunch at O’Reilly’s 304 which is opposite La Bodeguita Del Medio where they make amazing Mojitos. The restaurant served huge cocktails, the sea food was fantastic and the prices were great value for money.

We finished the evening at ChaChaCha, where we enjoyed some great food. The restaurant was spread out over two floors with the bar area downstairs and more restaurant seating upstairs. The food was beautifully presented and very tasty.

We started the day with a two-hour Vintage Car Tour around Havana, an amazing way to see Havana with 360 degree views in open top 1950s style American cars. We visited El Bosque De La Havana (The Forest of Havana), John Lennon Park, Revolution Square, Morro Castle and we finished by cruising down the Malecon Avenue. 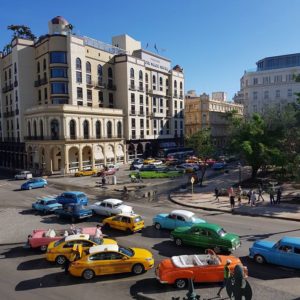 We finished our guided tour at the Nacional Hotel de Cuba. The 5* hotel was built in the 1930s and this landmark hotel is now a national monument. We were guided through the Nacional’s famous hall of fame, the walls of which display old photos of some of the hotel’s famous past guests among them Winston Churchill, Marlon Brando, Frank Sinatra and Walt Disney, to name a few. This grand hotel is located in downtown Havana, just minutes’ drive away from the centre of Havana.

That night we ate at VIP Havana before going to Club Tropicana Cabaret. One place you cannot miss while in Havana, with its vibrant costumes and amazing performers, it’s a great night for all ages. 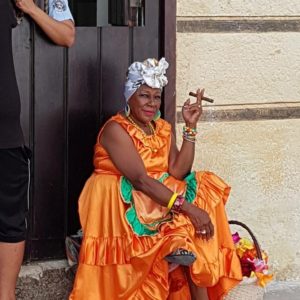 Our last day in Havana, we visited three of the main hotels in Havana. Inglaterra Hotel, Iberostar Parque Central and Gran Hotel Manzana Kempinski La Habana. Both all centred around Parque Central (Also just a few minutes away from Floridita, the go to place for a Daiquiri).

We started at the Inglaterra Hotel, this was the first hotel built in Cuba in 1875, the hotel and rooms were very grand with a beautiful reception area. Next stop was the Iberostar Parque Central, this hotel is split into two sections, the Colonel part and the Modern part, they are connected by an underground tunnel. Finally the Gran Hotel Manzana Kempinski, this hotel took my breath away. This hotel was opened in 2007 and for me the best hotel in Havana. Its rooftop pool and spa area were incredible with amazing views over Parque Central. The rooms were spacious and modern with great amenities.

That evening we were treated to dinner at La Guarida. The prefect way to say farewell to Havana, again somewhere that you must visit. The entrance through an old gateway in a crumbling mansion led to a monumental stairway and you’ll find the restaurant located on the third floor. The quality of the food is amazing!

We swapped city for beach and headed for Varadero. It takes roughly two hours to get from Havana to Varadero by coach. To break the journey we stopped at Bacunayagua Bridge, which is the tallest bridge in Cuba. It has a small outlet with a bar and gift shop which looks out on Bacunayagua Bridge with stunning views, but you’ll also find what has been named the best Pina Colada in Cuba.

After reaching Varadero we arrived at the Melia Varadero where we would be staying and that afternoon we were shown around three more hotels, the Melia las Americas, Royalton Hicacos and Iberostar Varadero.

The Iberostar Varadero is a great hotel for families, the hotel is very large with lots of facilities including a splash park, which is great for children. We ate that night at their Mediterranean A La Carte Restaurant and the food was really lovely, nicely presented.

The Royalton Hicacos Resort and Spa for me was the stand out hotel in Varadero. I would give this hotel a 10/10. This 5* hotel is adults only and each guest has a butler service with their room. The rooms are set out in a tropical décor, they give each guest unlimited use of the A La Carte Restaurants and they even have their own ice-cream parlour where they make their own ice-cream. Finally the beach, it was beautiful. White sand and crystal clear water. We saw 12 Hotels in Varadero, this hotel was my favourite. 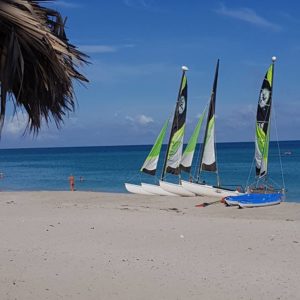 We visited the following hotels:

Out of the above hotels, the Iberostar Bella Vista and the Blau Varadero were my favourites. I definitely recommend both hotels. The Iberostar is good for both families and adults. They do have a splash park at the hotel to accommodate for children but they also have a rooftop terrace just for adults and certain floors that are adults only. The Blau is an adults only hotel.

The Paradisus Princesa is another really nice hotel, the hotel is a 5* adults only property. This hotel is very grand and the décor is very traditional however the service at the hotel that we received while there was very good.

We finished our trip to Cuba by enjoying a cocktail at sunset at Xanadu Mansion, which has the most amazing views, we ate at the Royalton Hicacos and then enjoyed some traditional Cuban music at the Buena Vista Social Club.

Cuba is a fascinating destination and one that you need to travel to sooner than later, before it loses some of its old world charm and Cuba Holidays are an excellent Tour Operator who can tailor make arrangements to customers specific requirements.

For more information on Cuba and Cuba Holidays contact sophie.keay@holidaylounge.co.uk or call 01455 233935